On October 8 Associate Pastor Sarah Brouwer preached a sermon entitled, “On the Road: Beginnings Are Good” at Minneapolis’ Westminster Presbyterian Church. Here are the Holy Scriptures for the day and extracts of that sermon.[1] Below is an aerial photograph of the new addition to the church and of Rev. Brouwer. 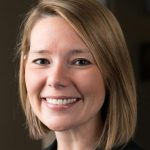 Listening for the Word

Readings of the Holy Scripture:

“Then God said, ‘Let us make humankind in our image, according to our likeness; and let them have dominion over the fish of the sea, and over the birds of the air, and over the cattle, and over all the wild animals of the earth, and over every creeping thing that creeps upon the earth.’”

“God blessed them, and God said to them, ‘Be fruitful and multiply, and fill the earth and subdue it; and have dominion over the fish of the sea and over the birds of the air and over every living thing that moves upon the earth.’”

“God saw everything that he had made, and indeed, it was very good. And there was evening and there was morning, the sixth day.”

“Now on that same day two of them were going to a village called Emmaus, about seven miles from Jerusalem, and talking with each other about all these things that had happened. While they were talking and discussing, Jesus himself came near and went with them, but their eyes were kept from recognizing him.”

“You may have heard this phrase among proud Presbyterians before: ‘Ecclesia Reformata, Semper Reformanda,’ the church reformed and always reforming. Even now, this latin phrase is a rallying cry for reformed people–a motto to remind us of who we are and who we intend to be.”

“Although we aren’t quite sure where it came from, it was written about quite frequently in the mid-20th century by theologian Karl Barth. Barth preached and taught during both world wars. He witnessed how the church, instead of being reformed, was conforming to anti-Semitism. Barth was considered theologically conservative, because he blamed more liberal theology for morphing God conveniently into the supporter of institutional agendas, like the Nazis. Barth fought for the oppressed through theology that was not popular during his time.”

“Barth was not a reformer for the sake of reforming; he didn’t insist on change for the sake of change. There was a global crisis happening, which the church became apologetic for, and Barth was called to respond. Throughout history, this church reformed and always reforming has sometimes been misused by people trying to obtain power, or exclude others. But, when reform  is legitimate and successful, it always seems to happen beyond the control or desire of the church as it is, and it usually has in mind those who have been left behind.”

“Now, here we find ourselves in 2017, at Westminster, a congregation right in the middle of yet another monumental shift. We believe that God is calling us to become more intentionally open and diverse, and responsive to the city around us. And because of an extraordinary gift, the project next door and the incredible mission opportunities with it are taking shape. Through the work of Open Doors Open Futures, and given our unique downtown context, and the juncture within the larger church and in our current culture, I am confident that none of this is coincidental. We stand on the precipice of large-scale change. It is upon us for a reason, and we have been called to the exciting task of deciphering what God is doing among us.”

“The disciples in Luke’s Gospel were at a critical turning point in their life, as well. It was Sunday, and they had spent the weekend grieving Jesus’ death. They heard the tomb was empty, but that was about it- they didn’t yet understand what had happened. Cleopas and another disciple were presumably making their way home to Emmaus, a walk that would have taken a couple of hours, leaving them plenty of time to recount the traumatic events of the last few days.’

‘The text says that as they were walking Jesus came near to them, but they were kept from recognizing him. It’s a strange turn of phrase. My educated guess says they weren’t the only ones on the road, walking home from Jerusalem that day, and they were in deep conversation, unaware of who was around them. But, let’s be logical here, they also weren’t on the lookout for a resurrected body. Their expectations had been foiled, and they no longer had a messiah who would usher in a new reign for the people of Israel.”

“This change in plans was devastating, and, as far as they knew, it put an end to their ministry. I can imagine there was a great amount of resignation between them. They had seemingly given up everything to follow Jesus–family members who counted on them had been left behind in pursuit of this religious radical named Jesus, now dead. And they were facing the facts of the situation. As Sarah Henrich writes, they had to ‘get real, grow up, and get back to work.’”

“As I read and reread these verses, where the disciples seem to have yielded to what they thought happened, I began to think about how hard it is for our own minds and hearts to be changed. We too can be in the dark about what God is doing. We miss resurrection, we move on with individual priorities, become resigned to the way things are, and we continue to hold on to biases that close our hearts. These disciples challenged me to consider: when was the last time I was truly changed?”

[I concluded that it was] “an intense seminary class in dismantling racism and bias. We met with some of the most diverse populations I’ve ever encountered, had some of the most difficult conversations I’ve ever experienced, and, it made me realize how much I didn’t know, how many biases I did and continue to have, and that it would be a lifelong pursuit not only to work on those biases, but to be honest and vulnerable about them and bring others along in doing it with me. I also learned an important lesson about ministry, which is that there is a difference between making change happen, and making space for God’s people to be changed.”

There “are, daily, new opportunities to choose how we will have our being in this world, and how we will posture ourselves–as individuals, and at this juncture in our history, as a community of faith. Will we continue on just as we are, using our new space to discuss our own opinions in the dark while the world clamors for good news and resurrection? Our reformation heritage, misinterpreted, can tell us that we alone are the change agents–that we are the ones with the lens that brings God into clearest focus. But Barth and Luther and Calvin would be the first to say that isn’t true; they weren’t the owners of change. They were reformers as a response to what God was doing in them, and what was happening in the world around them.”

“The story of creation in Genesis always brings words of blessing, but it feels especially appropriate as change is upon us, and we find ourselves in the midst of a new creation. You see, our creation story begins in the dark, in what seems like the unknown. But even in these first verses we understand that God is intentional, there was never nothing with God, but always something, waiting until just the right time to be changed into what is good. God calling creation good is more than that. It is akin to outstanding. This is our beginning. And thus our beginning always has been and always will be beautiful.

“You and I, we come from a beautiful beginning. And we shouldn’t forget that. As the world continues to present itself as anything but good, we trust in a God who takes what is—death– and starts fresh, makes something new out of it, changes it, and changes even us. ‘The earth was a formless void and darkness covered the face of the deep.’ These things are not erased, but transformed. Creation reveals not just God’s capacity for change, but God’s desire for change that is good”

“In the last couple of weeks, in the wake of natural disasters, and another mass shooting in Las Vegas, I have sensed a collective numbing of our nation. What is happening around us often does not reflect the goodness of God’s creation. Staying in the darkness of our privilege, heads down facing the road like the disciples, feels much safer. But we believe in a creative God–one who speaks words and does not stay silent, who creates not because of ability but because of a desire to change, who does not allow the chaos of the formless void to pull us under, but transforms it and calls it good. This same God sent Jesus to walk alongside his disciples until they recognized him, and showed them the change they were capable of if they trusted in the power of resurrection.”

“We are capable of that kind of change, too. Change that starts within, that is deeply influenced by God’s world around us. In January, when we step foot into the space next door, my greatest hope and prayer is that we will not be the same people we were before. Who we were does not get left behind, but it does get transformed. That is our call. As reformed people. As God’s people.”

“What we are building next door is a sanctuary–a sanctuary for the city that is physically accessible, and spiritually open. And our worship discernment team has been working hard to imagine what kind of  worship will happen there. What they are creating will be good, in the best sense of the word. What has been most surprising and good about working with this group is how much we have all been changed by the process, and how our posture toward the world has changed, too. We are creating space for lives to be transformed by God. This worship is not for us, only, it is for the unchurched, the de-churched, the nones, the poor, the wealthy, the old and the young, black and white, LGBTQ, and whoever else is seeking the good news of the Gospel, and we don’t know yet who else.”

“I would like to think that if Barth had been asked what the next 100 or 500 years of the church were going to look like, his answer would not have been concrete. I’m sure he had his hopes for it–more justice oriented, more gracious and welcoming. But, as a true reformer he would have also known that even he could not predict what God would do, and how God’s people would be changed. He knew the future of the church depended upon a people who could look up from the road they were on. And as reformers of the 21st century, this is where we must begin, too. From creation to resurrection, from reformation and into the future, God’s people have made the most faithful changes when they have been open to God first changing them.”

“Beginnings can be mysterious and always start in the dark. But we also trust that beginnings are good, if we are open to what God is creating, changing, transforming and resurrecting within us.”

“The church reformed and always reforming” is a significant reminder for why I am a member of a Presbyterian church. It is a human creation, is not perfect and always subject to changes to meet new circumstances and to correct outmoded or erroneous ways.

[1] The bulletin for the service and the text of the sermon are on the church’s website.