The Minnesota Orchestra’s May 2015 visit to Cuba was ranked as one of the Best Classical Music Events of 2015 by the New York Times. [1]

According to the Times’ Michael Cooper, “It was not just the mojitos or the Beethoven and Prokofiev, or the fact that an American orchestra was at the vanguard of the nation’s rapprochement with Cuba that made the Minnesota Orchestra’s tour of Havana in May a high point of the year. It was also the way the quickly-put-together tour signaled that the orchestra, which had been brought to the brink of death during a bitter 16-month lockout that ended in 2014, was back and was thinking big. . . . The Havana tour was one of those hopeful moments [for classical music] this year.”

This accolade reminded me of my listening to the Orchestra’s two concerts live from Havana on Minnesota Public Radio with tears of joy in my eyes. Arranging those live broadcasts itself was an amazing technological accomplishment by MPR and many others.

One of the pieces at the Friday concert was Beethoven’s Choral Fantasy with Cuban pianist Frank Fernandez. Later I learned that there was tension between Fernandez and the Orchestra’s Music Director, Osmo Vanska. In rehearsals Fernandez had his own sound technicians, who made the piano sound louder than the orchestra. Naturally Vanska did not like this and had his sound technicians manipulate the pianist’s system so that it would not sound louder than the Orchestra’s. (To the right is a photograph of the audience at Friday’s concert.)

The Saturday concert, to my surprise, opened with the Cuban and U.S. national anthems. Subsequently a violinist in the Orchestra told me that minutes before that concert he looked again at his music for the Cuban National Anthem and noticed it said, “Copyright 1952, U.S. Army.” He panicked, thinking they might not be playing the correct national anthem, and immediately took the sheet music to the Spanish-English interpreter assigned to the Orchestra. Fortunately she could read music and confirmed it was the right one.

A few minutes later at the start of the concert, the violinist said, Vanska had all the musicians stand and face the audience while motioning for the audience to do likewise. The audience did not know what was happening and only gradually rose to their feet. When the music started, the Cubans in the audience initially did not recognize their own anthem, but soon started singing with tears in their eyes. After it was finished, they were even more surprised to hear the Orchestra play “The Start-Spangled Banner” with the Americans in the audience lustily singing the words. (To the left is a photograph by Travis Anderson of the Orchestra playing the Cuban national anthem.)

These concerts were not the only activities for the Orchestra’s musicians in Cuba. They “played with students in a number of settings . . . [and] marveled at the high quality of their play in spite of poor instruments. The Minnesotans brought small gifts for the students, who have trouble obtaining basic items: rosin for the string players, who rarely get to change the horsehair on their bows, and mouthpieces for the brass players.”[2]

In one of those sessions with Cuban students, for example, Anthony Ross, Minnesota’s principal cellist, played the students a Mark Summer piece that he said was popular with cello students in America. Then they broke up into small groups, and Ross had a young Cuban cellist use Ross’ beautiful cello. (To the right is a photograph of Ross and the Cuban student.) At a class on conducting, Vanska told one student that his hands were “very natural” and fielded questions from a recent graduate who wanted advice on how to conduct Stravinsky’s ‘The Rite of Spring.”[3]

After Saturday night’s concert, Vanska and some of the Orchestra members went out to Habana Café, where Orquesta Aragón, a Cuban charanga group, was playing. The Cuban group soon was joined by some of the Minnesotans to play “Dos Gardenias,” the bolero that Ibrahim Ferrer sang with the Buena Vista Social Club. Charles Lazarus, a Minnesota trumpeter, told the crowd that there was “a very iconic trumpet solo at the beginning,” of the piece, but that tonight it would be played on the clarinet by Vanska..“By early Sunday morning he was playing clarinet in a decidedly more tropical vein as members of his orchestra and the Orquesta Aragón — think of them as El Conjunto de Minneapolis, perhaps — played a mixture of jazz and Cuban music.” (To the left is a photograph of Vanska on clarinet with some of the Minnesota musicians and the Orquesta )[4]

Thanks, New York Times, for reminding us of this wonderful event for the Minnesota Orchestra. Bravo! Bravo! 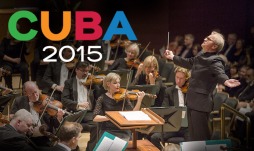 As discussed in a prior post, this February the Minnesota Orchestra announced that it would be playing two concerts in Havana, Cuba on May 15 and 16. At the invitation of the Cuban Ministry of Culture, Music Director Osmo Vänskä and the Orchestra will play Beethoven’s Choral Fantasy with the Cuban National Choir and Cuban pianist Frank Fernandez as well as Beethoven’s Symphony No. 3, Eroica. In addition, on the 15th they will play Beethoven’s “Egmont Overture,” and on the 16th Leonard Bernstein’s “Symphonic Dances” from West Side Story and Prokofiev’s “Romeo and Juliet.”

According to a recent article in Minnesota’s StarTribune newspaper, [1] this past January the Orchestra’s president, Kevin Smith, thought it would be great if the Orchestra could be the first U.S. ensemble to go to Cuba after the December 17th announcement of rapprochement between the U.S. and the island nation. Smith immediately called Minnesota’s U.S. Senator Amy Klobuchar and asked for help in pursing this idea. She, of course, said yes with this comment: “This trip is an example of the type of relationship we want to continue building between our people. Cubans are looking forward to more opportunities to interact with Americans.” [2]

Smith then asked the Orchestra’s musicians if they would give up a scheduled week of vacation in May in order to go to Cuba. They too said yes with enthusiasm. An Orchestra violinist, Aaron Janse, who was in a small advance group that went to Cuba in April, said, “We absolutely feel that we represent the state, the United States. We have a responsibility to be a bridge between the two countries. For us, as a community, to get this all together speaks volumes to where the Minnesota Orchestra is.”

Accompanying the Orchestra on a chartered direct flight from the Twin Cities to Havana will be a group of board members and community supporters as “cultural ambassadors.” They will be led by board member, Marilyn Carlson Nelson, and her husband, Glen Nelson, who are paying for the trip. As a co-owner and former chairman of Carlson Companies, a global hotel company, Carlson Nelson is interested in business opportunities in Cuba for her company.

On a historical note, the Orchestra (then called the Minneapolis Symphony) in 1929 and 1930 performed in Havana, and one of its pieces on the first trip was Beethoven’s “Third Symphony,” which will be played again this weekend by the Orchestra. MPR News has a 1929 photograph of some of the Symphony members getting ready to board a ship in Havana after their first trip.

[1] In addition to the StarTribune article, check out information about the trip on the Orchestra’s website and in a MPR News article.

[2] As discussed in prior posts, Senator Klobuchar is a strong advocate for U.S.-Cuba reconciliation. She is the author of the pending Senate bill to end the U.S. embargo of Cuba. She was a member of a U.S. Senate delegation that visited Cuba this February. She endorsed the formation of the U.S. Agricultural Coalition for Cuba that is being lead by Minnesota’s Cargill Incorporated.